Abstract: This paper aims to introduce some specific results of information technology in Cham language heritage conservation in Vietnam such as creating Cham fonts, and Cham font conversion. In this experiment, for Cham font, the acceptable level of Cham Thrah font is 60% of usability and 65% of high accuracy. On the other hand, the acceptable level for champa font only is (12%, 8%), camtanran is (5%, 14%) and bingu tanran (23%, 13%). For Cham font conversion application, we have checked the accuracy percentage of four Cham poems and results Ariya Gleng Anak 99,88% (n=2459); Nai Mai Mang Makah 100% (n=2523); Ariya Cam Bini 100% (n=1823); Ariya Po Ceng 99,91% (n=2202). Design Cham font and Cham font conversion application are necessaries and meaningful in conservation of Cham script.

Cham people are ethnic group of the Champa kingdom was established in the second century in central Vietnam. Cham language is one of the languages in the family of multi-island "Austronesian". Therefore Cham language is closely related with Malay language [3]. As compared to the Malay language, researchers have found traces on stone stele in Java island in the 7th century [1], while Cham letters has also appeared on the first stone stele, namely of Dong Yen Chau (Tra Kieu) in the 4th century [2,6].

Using information technology (IT) to preserve the endangered language is significant in the current, when the digital technology has developed with the diverse features of the storage and dissemination of information. IT has contributed in the indigenous language education, restoring and preserving of ancient script system is a very obvious fact in many countries [4].

Using font to type Cham script on the computer has become essential issues to help compiling textbooks, data storage, teaching and learning Cham script. Cham-Tanran font was created by the EFEO for Macintosh keyboard in 1988 showed that this font has typography and typeface relatively standard. However, this font is still having some defective and technical errors. Cam Thrah.ttf font created by Sang (2002, 2012) and Bingu di tanran.ttf by Cham Unessco (2012) developed from Cham-Tanran (EFEO) rebuilt for Windows keyboard. However these Cham fonts inconsistent the value of the code page, this causes many difficulties in the exchange of information. Besides, these fonts are still limited in the technical thereby create documents not ensure scientific and aesthetic.

Based on the above research on conflict and dangers of the Cham language, as well as the use inconsistent of Cham font typing and storing, we are interested in this issue and the three research questions of this study are as follows:

Research methodology play an important role in the process of implementing the project, it provides information and steps to carry out the program. In section 1, a brief of historical research on Cham script and Cham fonts are presented and used over time to preserve and conserve the Cham Akhar Thrah.

The target population of this study included two groups of people 1) university students, working people; and 2) religious people. An estimated of Cham University students in Binh Thuan Province total about 120 students, and number of Cham working people in Binh Thuan are 195. The scope of the survey for religious group only performed in three villages that are Palei Canat, Palei Dik and Palei Aia Mamih. The numbers of religious people in three villages were 105 people. Hence, the total of population in 2 groups is 420. Meanwhile the totals of items used for Cham script survey are two items: Choosing traditional Cham scrip; and Choosing modified Cham scrip.

In order to design new Cham fonts, we based on a number of valuable documents and dictionary which are using today include Cham-French dictionary of E. Aymonier & A. Cabaton; Cham-Vietnamese-French dictionary of G. Moussay, and Akhar Thrah Cham materials used in Cambodia that is currently stored in the library in French.

To explore the preferable Cham script for preservation, a survey to choose which kind of Cham script to use for Cham community. With 200 samples for 2 groups: 1) Religious group and 2) University students and working group [7]. The results show in Figure 3.

Figure 3. Chart of choosing Cham script to use

Fontographer was used to create favorable conditions for design Cham font with a number of important functions such as viewing all the character designs in the window, test or modify the font encoding and kerning in Metrics Window,...and supported on many different operating systems such as Macintosh, Linus, or Windows. This font has been built based on Cham dictionary and design on Unicode. Cham Thrah font typeface is based on drawings presented in Cham - Vietnamese - French dictionary of G. Moussay, published in 1971. The result is shown in Figure 1.

The following interface is the result of research products and tested the conversion of two first sentence of the poem Ariya Cam Bini as presented in Figure 4.

Cham Thrah fonts have significant in using, typing document, research, communication and teaching Cham language. Compared with camtanran.ttf, champa.ttf, bingudi tanran.ttf, it is so that cham Thrah fonts have outperformed with high accuracy and easy to use. Moreover, on both Windows and Macintosh keyboard, the cham thrah font has the same codepoint value, and then it is very convenient for users. In survey 50 users, result shows that cham thrah font has surpassed in accuracy and ease of use as shown in Figure 5. Specifically, the acceptable level is 60% of usability and 65% of high accuracy. On the other hand, the acceptable level for champa font only is (12%, 8%), camtanran is (5%, 14%) and bingu tanran (23%, 13%).

This study has been conducted to identify the choice of Cham script among Cham people about traditional Cham script and modified Cham script, and also carry out a new approach in analysing and designing all code point value of Cham fonts reasonable on the keyboard. Cham fonts have been design based on Unicode and using for both Macintosh and Windows keyboard. Hence, Cham Thrah character and Times New Roman characters have the same size in the same text. Therefore the conversion or storage information on both operating systems is stable results. In addition, the applications of Cham font conversion from EFEO Cham Latin to Cham Akhar Thrah from the experiments were highly accurate. Information technology applications to create Cham font and converting Cham font have an important implication in Cham language conservation. 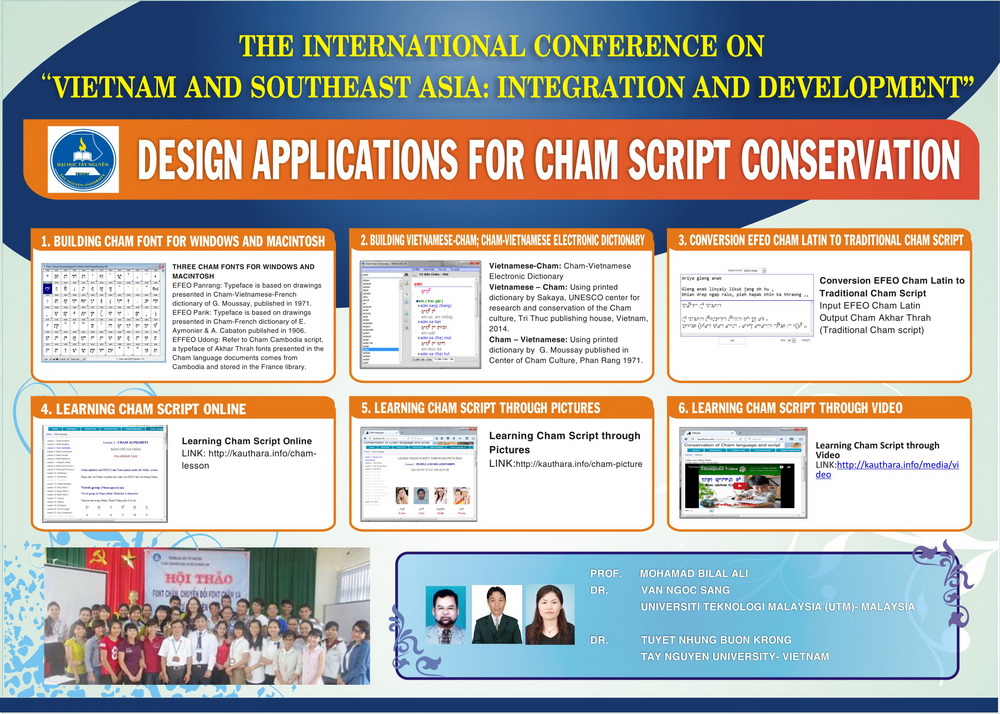 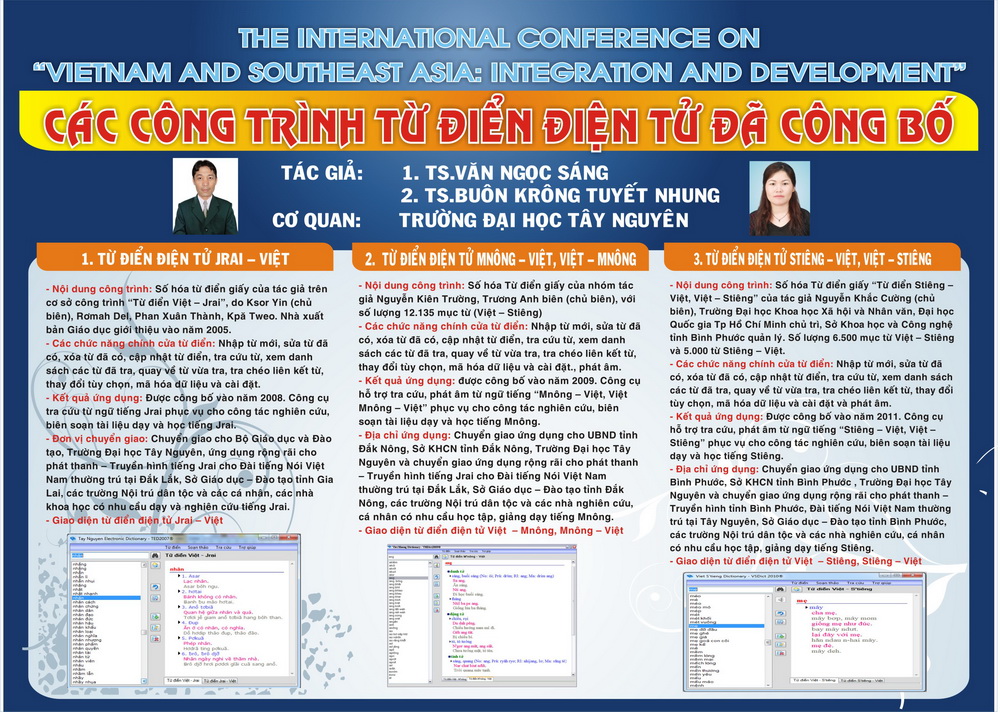