The Cham people who are now the minority ethnic in Vietnam speaks with the language familiar used as others Malay groups but differ in their written language. Cham Script inscriptions appear on Dong Yen Chau stone stele (Tra Kieu) in 4th century and the Cham are using this script system until today. Ensuring the preservation of Cham language, this study intended to design a tool to convert the EFEO Cham Latin in Malay system to Cham Akhar Thrah. The method used is by converting Latin EFEO into intermediate characters code followed by assigning it to Akhar Thrah backwards. Cham font conversion application has been created, which has carried out a number of technical requirements, and content conversion ensures correct in vocabulary, semantics and grammar. In this experiment we have checked the accuracy percentage of three Cham poems and results Ariya Cam Bini 100% (n=1823); Ariya Gleng Anak 99,88% (n=2459); Nai Mai Mang Makah 100% (n=2523). Cham font conversion is necessary and meaningful in conservation of Cham script. It will be used in schools, institutions in the country and overseas as well as assist in teaching and learning Cham language.

The Cham script was a systems of signs derived from the Sanskrit alphabet in southern India, in the long term approach culture of Hindu civilization. The Cham people have used Indian Sanskrit and then they have improved this Sanskrit completely and become the Cham script [1].

The use of information technology to preserve the endangered language is not new in the world today when digital technology has developed well. Information technology has significantly contributed in the indigenous language education, restoring and preserving of ancient writing system [2]. In Vietnam, some organizations and individuals have studies on designing a number of fonts such as champa.ttf, camtanran.ttf, bingudi tanran.ttf, cam thrah.ttf, Cham Thrah1.ttf to support for compilation of Cham documents on the computer. However, the opportunity for studying of Akhar Thrah for community are limited. Furthermore, identification the typeface of Akhar Thrah characters is more difficult than read the Latin typeface. Hence, the EFEO Cham Latin transliteration followed Malay system was established in 1996 to support for reading and writing Cham Akhar Thrah.

In Vietnam, there is currently no tool to support for converting Cham Latin to Cham script. Therefore, in this study we carry out a method and construction the Cham font conversion.

In order to explore the preferable Cham script to be preserved, the Figure.1 describes the development process of Cham script and choosing Cham script and Cham Latin to preserve. Based on the result of survey, we develop an application for Cham font conversion. Research activities phases are presented in the diagram as below.

There are four phases were taken to develop the application product to preserve Cham language.

Phase 2: Cham script selection: In order to select the Cham script to be preserved, we will conduct a survey on the most preferable Cham script among the Cham community. The main group who involve in the survey including religious groups, students and Cham intellectuals. Currently in Cham communities, they was selected the script based on the traditional Cham script from the 17th century to preserve, because this script is stable and is stored in multiple documents. For the Latin script, we have decided to use the Latin of Malay system by EFEO applies for the Cham language.

Phase 4: Application in Cham community: First of all, this application should be assessed through a forum, to verify the feasibility and completeness of an application program before bring it widely used into the community.

Traditional Cham script is a script derived from the Sanskrit which is difference Latin characters. In order to convert the Cham Latin to Cham Akhar Thrah, we need to assign values ​​between Akhar Thrah script and Cham Latin respectively as in Table 1.

Research methodology play an important role in the process of implementing the Project because it provides information and steps to carry out the program. In section 2 of literature reviews, we have presented a brief of historical research, systematic entire the documents related to language and Cham script such as ancient Cham script, traditional Cham script, modified Cham script and Cham Latin letters. As well as presented some Cham fonts in using and assigning Cham character. This section mainly explains the details of the research methods that are used to conduct this research. Parts of the study are presented in details as below

This research implements quantitative approach. The variables will be measured by the tool so that the data can be analyzed using statistical procedures to generalize and systematic replication of results [3]. When the research approach and research method was selected, we need to clearly define the target population for the study. Thereafter, selecting a sampling method ranging between probability and non-probability to determine the sample size was covered in the sample selection part [4].

A population imply to the whole group of individuals, events or objects having a common observable characteristic [5]. The target population of this study included two groups of people group1) university students, working people; and group2) religious group of Cham in Vietnam. An estimated of Cham University students in Binh Thuan Province total about 120 people, and number of Cham working people in Binh Thuan are 195 people. The survey for religious group only conducted in three villages that are Palei Canat, Palei Dik and Palei Aia Mamih. The numbers of religious people in three villages were 105 people. Hence, the total of population in 2 groups was about 420.

By convention transliteration of Cham Latin EFEO, the diacritics in this case always have position in front of vowels or syllables. Diacritics never have position in front of the character in end the word (Akhar Matai). Therefore, if the characters need to convert is not the first character of a word, and the convert string are not contain the Langlikuk word, the next character is not the final consonant (Akhar Matai), then proceed of conversion is according to the following table.

If the character need to be converted in the table below and their location is not the first character in a word, we convert as follows.

To explore the preferable Cham script for preservation in section 2, we conducted a survey to choose which kind of Cham script need to preserve. With 200 samples for 2 groups: 1) Religious group and 2) University students and working group.(source [7]). The results show in Figure 3.

During the experiments for Cham font conversion, we have carry out the ADDIE method specifically in three steps which were develop, implement and evaluate. At each stage convert EFEO Cham Latin to intermediate character code with the cases such as converting takai akhar, converting dar sa, takai kuk, converting é vowel, convert final character (akhar matai), convert other cases, and especially the stage for checking and comparing in the Special words. We've been checking, evaluation and development of products good relatively.

The following interface is the result of research products and tested the convert of three first sentence of the poem Ariya Cam Bini as presented in Figure 4.

The Cham font conversion method has significant important when convert the Cham Latin to Cham Akhar Thrah through intermedia character code and select the special words from the library.

Font conversion applications from EFEO Cham Latin to Cham Akhar Thrah with the interface as Figure 4. And we have checked the accuracy of three Cham Poems as presented in Table 3. Poem Ariya Cam Bini 100% (n=1823); Ariya Gleng Anak 99,88% (n=2459); Nai Mai Mang Makah 100% (n=2523). Cham font conversion application will be used in schools, institutions in the country and overseas as well as assist in teaching and learning Cham language.

We have presented a new approach of Cham font conversion in assigning of EFEO Cham Latin, Cham script character and the Intermediate Character Code (ICC). Font conversion approach includes two stages that are: 1). conversion of Cham Latin EFEO into intermediate characters code and 2) Conversion of intermediate characters code to Cham script. The experimental evaluation of Cham font conversion with different documents and assessment results are considered acceptable. Furthermore, the conversion is accurate on some common words. This experiment also has a small number of errors if the users enter words which are not from the Cham vocabulary or some proper nouns. 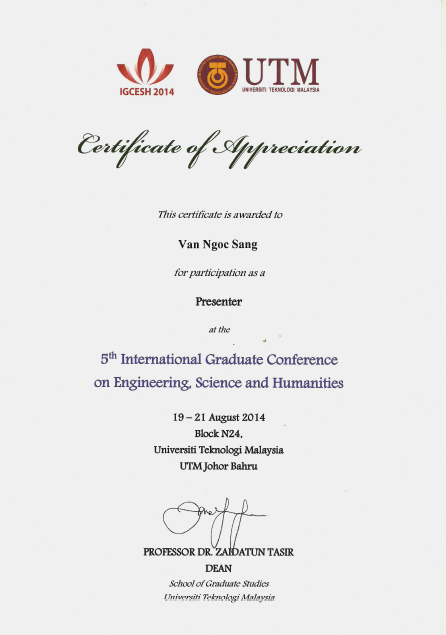